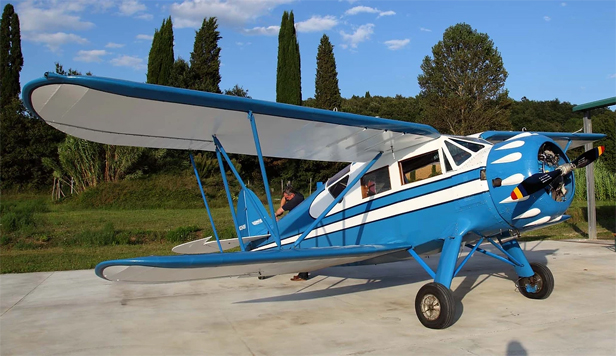 The history of the machine is reported as follows:

This aircraft was originally completed on June 9th, 1933, and delivered to its first owner, George Willis of Great Neck, New York. A few years later, after a brief personal ownership by legendary test pilot Vance Breese, it was sold to Charles Knox and Robert Tyce, owners of K-T Flying Service Ltd of Honolulu, Territory of Hawaii.

Since the creation of K-T Flying Service in 1934, Bob Tyce was personally responsible for the flight training of a large number of civilians in the Territory. For primary training, they used Piper J-3 Cubs and three Fleet Biplanes (shown below). In addition to flight training, K-T performed sightseeing flights, out-island charter services and non-scheduled cargo service. Bob and Charles added the Waco UIC to the fleet at the beginning of 1938.

​By 1941, under the auspices of the Civilian Flight Training Program, a large portion of K-T’s business was private flight training for military personnel hoping to transfer to the Army and Navy flying arms.

Military sources state that, in conjunction with this activity, in the early morning of December 7th, 1941, Bob Tyce and Marcus Posten, a young sailor assigned to the USS Argonne at Pearl Harbor, were flying in a two aircraft formation on a cross-country trip from Halewia to Honolulu.[1] While some believed that the Waco may have been flown by Bob Tyce that fateful morning, the Poston report has been proven inaccurate by Stephen Harding, Aviation Historian as eyewitness testimony placed Bob and Edna Tyce on the John Rodgers ramp at 07:55 on that morning when a Japanese aircraft opened fire.

“Bob turned to say something to Edna and a bullet hit him in the back of the head, exiting through the side of his throat and leaving a hole that Edna later described as big enough to “put a golf ball through.” He dropped to the ground and his wife, unhurt, reacted as the nurse she had once been, checking Bob’s pulse, though she knew intuitively that he was already gone.”[2]

Killed at 07:55 on December 7th, 1941, Bob is generally regarded as the first American civilian killed in enemy action during the attack.[3]

On December 8th, the US War Department grounded all civilian aircraft in the Hawaiian Islands and on the west coast of California.

After flying 9:35 hours in the 6 days leading up to the attack, the final entry in the Waco logbook for KT Flying Service states “Aircraft Dismantled” [4]

The Waco is located in Florida and is currently being offered for $139,000. Click here to check out the complete listing.