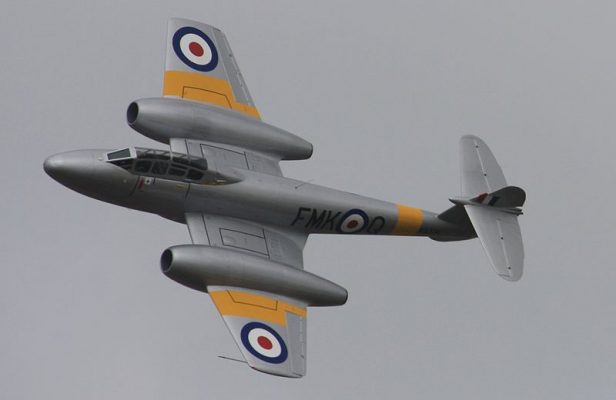 The oldest original airworthy jet in the world has performed its final flight in the UK before moving on to a new owner in the US.

Glostor Meteor T7 “Queenie” (WA591/G-BWMF) was delivered to the RAF in 1949 and served as a training machine at a number of bases before becoming a gate guard at RAF Woodvale. In 1995 Meteor Flight began restoring the aircraft and it returned to the air at Kemble in 2011. In recent years it operated with Classic Air Force at Coventry, which closed down in 2016 following the retirement of its founder.

Last year, the Meteor was acquired by Detroit, Michigan-based World Heritage Air Museum (WHAM) and last week the machine performed its final flight in the UK, traveling from Coventry to Liverpool for shipment overseas.

WHAM states that they are on target to demonstrate the Meteor at Oshkosh this year. Additional details on this exciting development will reportedly be forthcoming.

Click below to check out a video of Queenie’s final UK flight.

It's the Gloster Meteor's final flight in UK airspace, an incredible piece of history. 🛫✈️