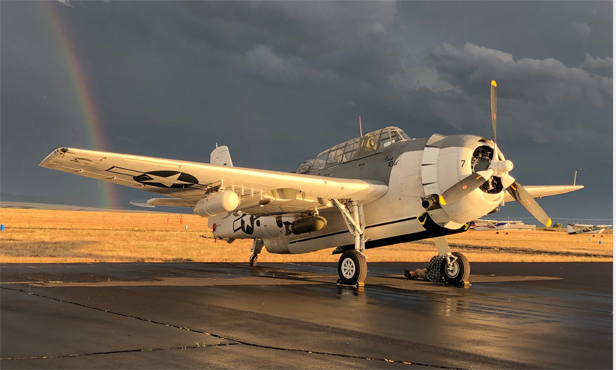 Manufactured in March 1945; Accepted by U.S. Navy; Stationed at NAS Seattle for use as a Radar Operator Trainer; VT-4; VT-11; CASU (Carrier Auxiliary Service Unit); Decommissioned from the US Navy in 1956. Never a Crop Duster or Fire Bomber

Additional features include an avionics package, electric standby hydraulic pump, electric oil shut-off valve interconnected to starter, two piece tailwheel tow bar installed in bomb bay and Bruce’s custom cabin cover (including turret). A lengthy list of spares and tools / manuals are also included. The aircraft has been maintained by Airpower Unlimited of Jerome, ID since 2016 and the listing details restoration and significant restoration work since that time.

The Avenger is located in Oregon and is being offered for $495,000. Click here to check out the complete listing.

Previous post: 1941 Stearman For Sale: “All Options, Nothing Needed”