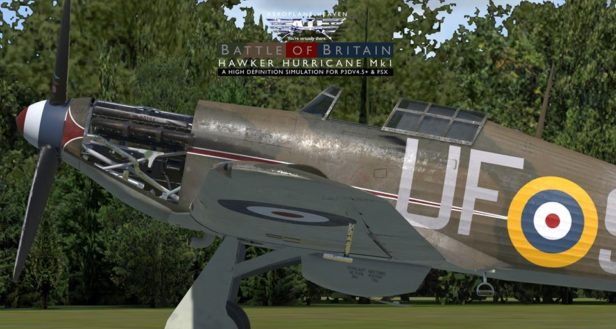 As previously reported, the model is touted as offering full PBR (Physically Based Rendering) materials and textures for P3DV4.5, which are said to provide a new level of realism, making it what the developer believes will be the first warbird made completely with PBR technology both inside and out. The detail level is described as “exceptionally high” and there are many unique animations.

The list of features and liveries incorporated into the release is quite lengthy:

Detailed Browning Machine Guns and ammunition chutes in the gun bay, viewed by removing the cover.

Choice of exhaust stacks (“fishtail”or round profile, depending on configuration of prop)

Choice of propellers and spinners – Rotol or DeHavilland

Jettisonable canopy using the correct lever in the cockpit.

Evocative Battle of Britain pilot figure, standing on the wing when flying pilot is removed. (Optional via switch)

Authentic refueling bowser truck which actually progressively refuels the aircraft, using a switch in the cockpit.

Retractable tail-hook and catapult bobbins on the Sea Hurricane.

Accurate tail-hook controls will latch and lock the Sea Hurricane hook when deployed.

Separate “late model” interior as installed in the “restored”version

Systems modelled into this Hurricane include engine overheat and failure if allowed to idle for too long.

Ability to belly-land or water-ditch the aircraft with visual display of bent prop-blades and damaged spinner. This is for Rotol or De Havilland props.

The following liveries are included in the package:

P3576 GN-A Flown by Flight Lieutenant James Brindley Nicolson, 249 Squadron RAF Leconfield, Yorkshire August 1940. Nicolson was the only Battle of Britain pilot to be awarded the Victoria Cross, following action on the 16th of August in which he was shot down, suffering horrendous burns. Despite his horrific injuries, Nicolson pressed home his attack and destroyed an ME110. before bailing out.

P2923 VY-R Flown by PO Albert Lewis 85 Squadron RAF Castle Camps (Debden) July 1940. Lewis typified the spirit of the young men who flew in the Battle of Britain. A confirmed “ace”, he was shot down in flames on the 28th September 1940. Despite severe burns and shrapnel wounds and temporary blindness he recovered to fly again in 1941 becoming a Flight Commander with a DFC and Bar. His final tally was 18.

P2725 TM-B Flown by Flight Lieutenant Raymond T Holmes 504 Squadron RAF . It was in this aircraft that Holmes, out of ammunition, deliberately rammed a Dornier and the first enemy aircraft over London causing it to crash into Victoria Station. Holmes survived both the ramming and the war.

P3675 UF-S Flown by Flight Lieutenant Michael “Mike” Robinson 601 Squadron RAF Exeter 1940. Whilst flying this machine, Robinson destroyed 4 aircraft with another claimed damaged. He was posted to 238 Squadron on September 28th 1940 This aircraft carries unconventional striped markings and a red, white and blue spinner. None of which was officially sanctioned by the RAF.

R4118 UP-W Flown by Various pilots of 605 Squadron RAF Drem 17th August 1940. Flying 49 sorties in the Battle of Britain it is credited with 5 victories. What makes this particular aircraft special is that it still survives to this day, in flying status, making it the only genuine Battle veteran still flying.

R4118 RESTORED. This famous fighter has been meticulously restored following a checkered career and latterly languishing in an Indian university back yard until 1996. Today it flies as a fitting tribute to the men who flew and fought in the Battle of Britain

V7467 LE-D Flown by Squadron Leader Douglas Bader 242 Squadron RAF Coltishall 1940. Bader “the legless ace” scored most of his Battle of Britain victories in this machine before transferring to Spitfires. It carries his famous “booting Hitler” nose art. Bader was eventually shot down and taken prisoner for the rest of the war.

NOTE: A professional quality paint kit will be made available after product launch. This enables anyone with re-painting abilities to add further liveries depicting more famous aircraft.

The simulation has been designed for FSX Acceleration pack, FSXSE, P3DV3, P3DV4.4 and P3DV4.5+