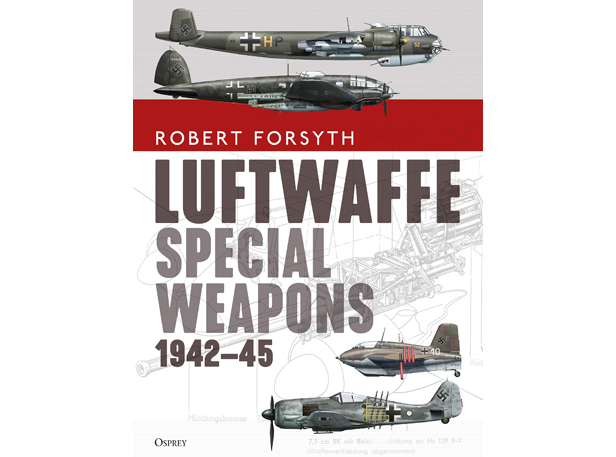 Robert Forsyth’s new book Luftwaffe Special Weapons 1942–45 offers “a highly illustrated study of some of the weapons developed by Nazi Germany to equip the Luftwaffe in their desperate war against the encroaching Allied forces.”

As the course of World War II turned against the Third Reich after Stalingrad some of the most inventive and radical proposals, and designs, were put forward by armaments manufacturers, scientists and technicians, aircrew, and even private individuals to the Reichsluftministerium (German Air Ministry) for consideration. Some proposals were destined never to leave the drawing board, while others not only underwent trials but were issued to operational units and used in action. In this fascinating new book, leading Luftwaffe historian Robert Forsyth examines the many different types of weapons that comprised the Luftwaffe’s increasing potent arsenal during the second half of the war. This was the period that saw the development and adoption of aerial torpedoes, wire-guided rockets and missiles, batteries fired by photo-electric cells, chemical weapons, composite bombers, and air-launched flying bombs.

The title is the result of “many years of research” and draws from “first-hand interviews conducted with former pilots and German archive reports.” It measures 7.79 x 1.11 x 9.86 inches and spans 272 pages.