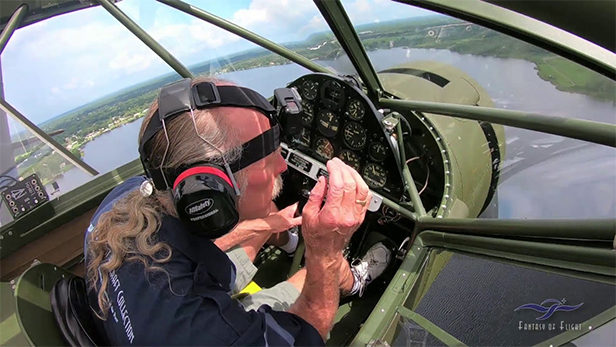 Kermit Weeks has released the second video in his two part “Kermie Cam” series dealing with his 1941 Stinson L-1.

This particular example was delivered to the Army Air Corps in December 1941 and initially served with 112th Observation Squadron at Ft. Bragg, North Carolina before moving on to different locations on the East Coast. It was later used for rescue with the 11th Air Force in Alaska. Following its military service the aircraft was acquired by Paul Mantz and used as a camera platform in a number of movie productions including The Great Waldo Pepper. Weeks acquired the machine from the Movieland Air Collection in 1981 and used it to tow banners. It was damaged during Hurricane Andrew in 1992 and has since been completely restored.

While part 1 (available here) included a walk around, cockpit tour and start up, part 2 sees the machine take flight. Kermit points out some of the things he pays attention to when flying the L-1, performs a slow pass or two, and sees how she does overall. Click below to check it out.