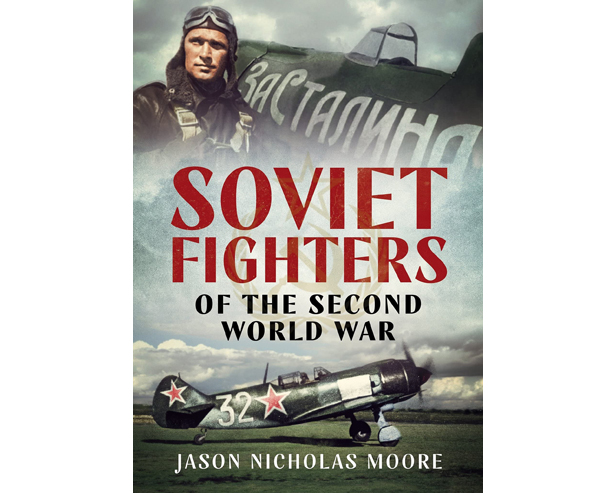 Among the latest releases from Fonthill Media is Jason Moore’s Soviet Fighters of the Second World War, which “details the development of the Red Air Force fighters, from the dark days of Operation Barbarossa, to eventual triumph over the ruins of Berlin.”

Starting with obsolete aircraft such as the Polikarpov biplane and monoplane fighters, the Soviets then settled on two main lines of development; the inline-engined LaGG-3 and its radial-engined derivatives, the La-5 and La-7, and the inline-engined Yakovlev fighters, which were produced in greater numbers than any other series of fighters. Not only are these aircraft described in great detail, but experimental fighters are also dealt with. In addition to the descriptions, accurate color profiles are provided illustrating the evolution of these aircraft in terms of design, camouflage, and markings. From the fixed undercarriage I-15bis biplane of the beginning of the Great Patriotic War, to the superb La-7 and Yak-3 fighters of the last year of the war, the fighters of the Red Air Force are all covered in this comprehensive book.

The 416 page book is described as “the first comprehensive reference work on Soviet fighters of the Second World War written by a native English speaker.” It utilizes “the most up-to-date research” to produce a “stunningly accurate” record with “previously unpublished color profiles.” It includes 192 black-and-white and 85 colour illustrations.