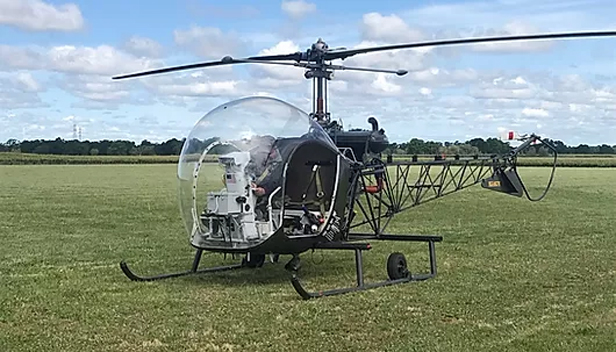 The machine was originally constructed by Bell in July 1951 and went on to see use as a U.S. Navy trainer. In 1958 it became surplus and was acquired by Adrian Grieve in 1972, who rebuilt it to Bell specifications and received a Standard Airworthiness Certificate in 1973. ​

S/N 263 was used in various action movies. Its most notable role was starring in the hit television show M.A.S.H. In the opening scene where two helicopters are flying formation, 263 is closest to the camera, In the second scene, 263 is the second helicopter on approach to the landing pads. During the ten years that M.A.S.H. was filmed, 263 was utilized many times both as set dressing and in flying scenes. 263 was utilized in the final departure scene of the final episode, one of the most watched TV episodes of all time.

Folloing the conclusion of the series, 263 was sold and used for crop dusting and cattle counting. It was then sold to the current owner who restored it back to its original M.A.S.H. TV show configuration. The machine is locate in Reno, Nevada and offers are currently being accepted. Click here to check out the complete listing.