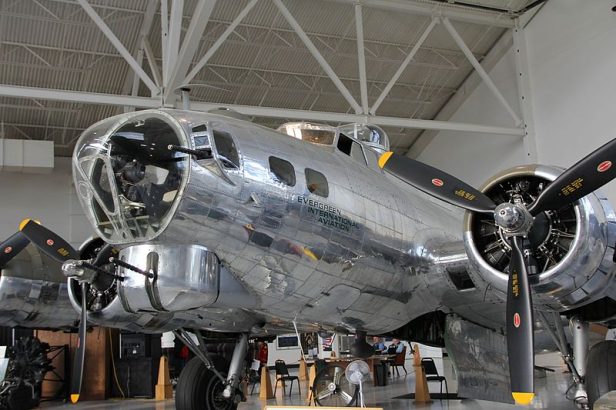 This week, B-17G “Shady Lady” performed its first engine tests in 15 years in preparation for its upcoming move to a new home.

The aircraft (S/N 44-83785/N207EV) was delivered to the USAAF toward the end of WW2 and was used to transport cargo and passengers before entering civilian service. Between 1954 and 1959 it was used by the CIA to perform secret and highly dangerous missions over the Chinese mainland along with four other B-17s. After returning to the US, the machine was fitted with a Fulton Skyhook and demonstrated its capabilities by rescuing James Bond in the 1965 film Thunderball. In later years, it was converted to an air tanker and served as a firefighter until ultimately being restored to military configuration and displayed at Evergreen Aviation and Space Museum in McMinnville, Oregon.

“Shady Lady” was acquired by the Collings Foundation of Stow, Massachusetts in 2015. It is expected to begin test flights shortly and, if all goes well, will likely depart for its new home by the end of the month. Upon its arrival, the bomber will reportedly receive a detailed inspection and restoration before joining the Foundation’s popular “Wings of Freedom” tour. The tour’s current B-17, “Nine-O-Nine”, will undergo a major inspection at this point, likely receiving a new livery in the process.

Click below to check out videos of this week’s tests.

Next post: Pressurized A-26 On Mark Marksman Offered For Sale